Jon Pousette-Dart will be performing  a very special set on Sunday, August 9th on the Alabama Schooner in Martha’s Vineyard, MA. 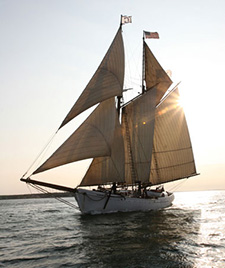 “The schooner Alabama is a living piece of America’s maritime history. Built in 1926 for the Mobile, Alabama Bar Pilots, she served until her retirement in 1966. She is not a replica, a ship built to emulate the style of past generations, but rather a design of Thomas F. McManus, a man widely regarded as the best designer of all the Gloucester fishing schooners. Alabama’s second phase of her life began when the Coastwise Packet Company and its owner, Robert Douglas purchased and brought her to Vineyard Haven in 1967. Never fitted out as a sailing vessel by the Mobile Pilots, she was finally given this opportunity thirty years later when it was decided to put her back to work in 1994. The rebuild that was a result of this decision lasted over three years and replaced almost 90% of her original form. As with the Shenandoah, Captain Douglas gave every consideration to her construction and the result is a vessel true to the era and design of McManus. The fishing schooner was an American invention, and the Alabama represents the finest vessels from this area when ships like her were relied on to provide the country with the staple of its economy, codfish.”                                      -theblackdogtallships.com

This Jon Pousette-Dart performance will be a benefit for “Friends of MVY Radio,” a longtime staple radio station in the local area. Tickets are on a first come first served basis, and can be purchased at THIS LINK.

The show will take place on a sunset cruise from 5-8pm.

Join Jon Pousette-Dart as he performs at The Kate on Friday, June 4, 2022 The Katharine Hepburn Cultural Arts...

Two of the most beloved folk rock acts of the 70’s join forces for a dynamic double bill! Jon...

Join Jon Pousette-Dart and Jonathan Edwards as they performs at the River Club Music Hall. Doors open at 7:00...

Join Jon and Pousette-Dart Band for an Amazing Performance at Towne Crier on April 8, 2022. Show starts at...